New Record in the Non-Stop modality!

Last wednesday 3rd of April, the Non-Stop modality record from Desafío Patanegra was broken. It all started in 2017, when a man by the name of Nando Soriano called me and said he wanted to establish a strong record, as he liked this initiative taking place in Huelva, in his beloved Sierra (mountain range) So he came and succeeded, brought an excellent logistics companion, Silvia, and two friends who took turns at joining him every 25km. And he made it, taking the time down to 15 hours and 22 minutes.

Two years and two months went by without anyone getting even close, except for two other contestants of the Desafio Patanegra, coinciding at Huelva’s Ultratrail Club relay modality: Rafa Aguilera and Francisco Fernández. They finished in 17 hours and 49 minutes.

Video patanegra Challenge: "The Sierra of Huelva, an open secret in autumn"

That the beauty of the Sierra is amazing in autumn is nothing new for many people. That even knowing it surprises, either.

The autumn has brought new ocher colors to the Sierra and we have not been able to resist in this wonderful natural park of the Sierra de Aracena and Picos de Aroche full of oranges, yellows, greens, browns and blues. 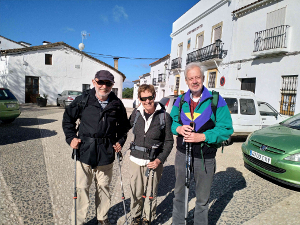 At the beginning of May 2018, we were the first Germans to complete the Desafío Patanegra. In contrast to ambitious "finishers", we divided the entire tour (about 120 km including small detours) into seven stages of between 10 and 22 km per day. This left us with plenty of time to enjoy the route and the landscape, to take pictures on the way, to admire plants and a partly unknown fauna. We discovered that the Desafío Patanegra can not only be completed as an athletic challenge, but also as a hiking tour focusing on the enjoyment of a beautiful mountainous landscape that is obviously in ecological balance.